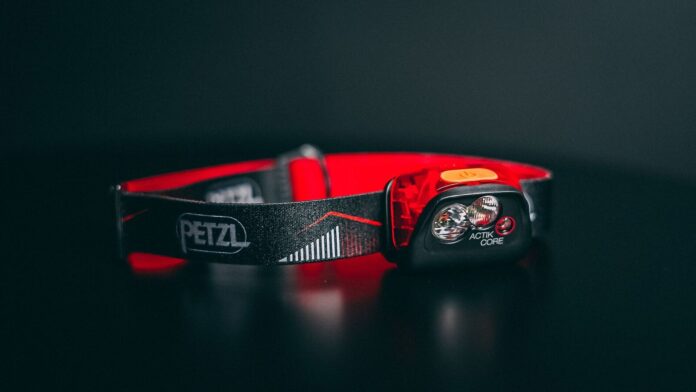 The Petzl Actik Core is a hybrid head torch which features a rechargeable lithium battery and two main beams. These two beams can be used simultaneously or stand alone. As mentioned, there is a rechargeable battery but the head torch an function on AAA batteries. Also, at just 90 grams, the head torch is incredibly lightweight for 350+ lumens.

Many outdoor adventurers prefer Black Diamond which is another excellent head torch for camping in Ireland. But Petzl was the first head torch which I found no reason to replace. Amazingly, the output can last for up to 60 hours on full power and four times this amount of time on the lower five-lumen setting. Stretching for more than ninety meters, the beam is impressive, but naturally, this beam will reduce power as the battery runs down.

How did I test the Petzl Actik Core?

Having hiked the entire Pacific Crest Trail with this head torch, I can say that the Petzl Actik Core was one of my best finds of the year. Due to the wide beam, it was great for setting up the tent after dark. But I also found that the head torch was water resistant and with a rating of IPX4, this is something you can expect with the torch. I also found this torch to be  consistent with the manufacturer description in every other way.

Comfort – Although the Actik does not have a very large amount of padding, I found this irrelevant regarding comfort. All considered, it fit well, and the headband was fairly easy to adjust whenever necessary.

Quality – The Petzl Actik Core is a sturdy head torch for Microadventures and comes with a five-year guarantee.

Operation – Having held the power button for two seconds, you can switch between red and white mode. Meanwhile, the setting in between is a similar to a power saving mode and very useful when considering a head torch for long distance trekking.

Downside – I feel that Petzl should include a lockout switch on these head torches to ensure it does not switch on by accident. Not a major issue but useful in the long run.

With a rechargeable battery, you can quickly recharge this torch on the trail with a power bank. But I was mostly impressed by the strength and reliability of the Petzl Actik Core. It’s reasonably strong (I’ve dropped mine many times) and comfortable on the head. There’s not much more to say – I see no reason to shop around when a piece of gear is this good!

You Can Buy the Petzl Actik Core Here

It doesn’t really “take time” to go on adventures but it takes time to record and tell stories about them. Your support will help inspire others to “get outdare” and experience the many benefits that come with spending more time outdoors. And I believe that every one of us deserves equal access to the great outdoors and advice or guidance to stay safe/comfortable during the process. No matter how uncertain the future might seem, Outdare will remain with you, delivering quality content that helps improve the lives, health and safety of our followers. Every contribution, is so valuable for our future. You can support Outdare on Patreon from €5 per month – it only takes a minute. Thank you!

Derek Cullen
Blogger, coffee-drinker, full-time nerd. Some people call me an adventurer. I don’t correct them.
Previous articleWhat is a Bivvy Bag and Why Might You Want One?
Next article5 Best Water Filters for Hiking in Ireland

The Lifestraw is a reasonably cheap water filter which is light and easy to store. It does precisely as described; it filters...
Read more
Gear Reviews

The Vango Banshee 200 Pro is my go-to one man tent. Is it the lightest tent in the world?...
Read more
Subscribe
Login
0 Comments
Inline Feedbacks
View all comments
- Advertisment -

I never switched on my camera that night or any other night in the African bush. I was simply too afraid to make any...
Read more

Don't worry, it's probably not what you think! There's no bath tub or nudity required. Forest bathing is...
Read more

The Lifestraw is a reasonably cheap water filter which is light and easy to store. It does precisely as described; it filters...
Read more

There are so many reasons that I wish to live more adventurously every day. Many of these reasons are practical in that...
Read more
Load more

We’re all about sharing stories, photos and videos that might inspire others to get outdoors more often. We also make t-shirts, beanies, and accessories for people that love to explore and spend as much time as possible with nature.

Any cookies that may not be particularly necessary for the website to function and is used specifically to collect user personal data via analytics, ads, other embedded contents are termed as non-necessary cookies. It is mandatory to procure user consent prior to running these cookies on your website.